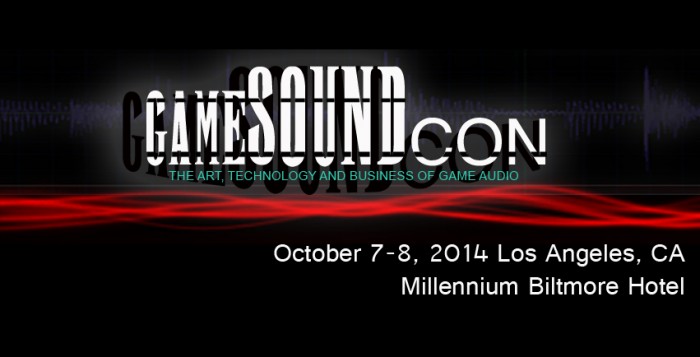 GameSoundCon 2014, the leading conference on video game music and sound design, has announced early bird discounts on all registrations until September 1, 2014. The organization’s 10th conference will be held October 7-8 at the Millennium Biltmore Hotel in Los Angeles and feature two days of sessions, panel discussions and hands-on workshops from over twenty of the game industry’s leading composers, sound designers and audio directors.

“The video game industry has been changing rapidly,” said Brian Schmidt, Executive Director of GameSoundCon. “New consoles have been launched, casual and social games have exploded onto the scene. We’ve put together speakers and sessions this year that reflect the changing challenges of working in videogames for both aspiring and professional composers and sound designers. GameSoundCon continues to be the premier audio event for people who want to understand the creative, technical and business challenges of working in sound for games.”

This year’s featured keynote speaker will be Marty O’Donnell, creator of perhaps the most iconic game soundtrack of the recent era with his work on Halo. O’Donnell, formerly audio director at Bungie, now with his own studio, will talk about stimulating creativity, the video game business, and what it was like to collaborate with Sir Paul McCartney on the upcoming game Destiny.

Full event details as well as ticket purchasing can be found at the GameSoundCon website.